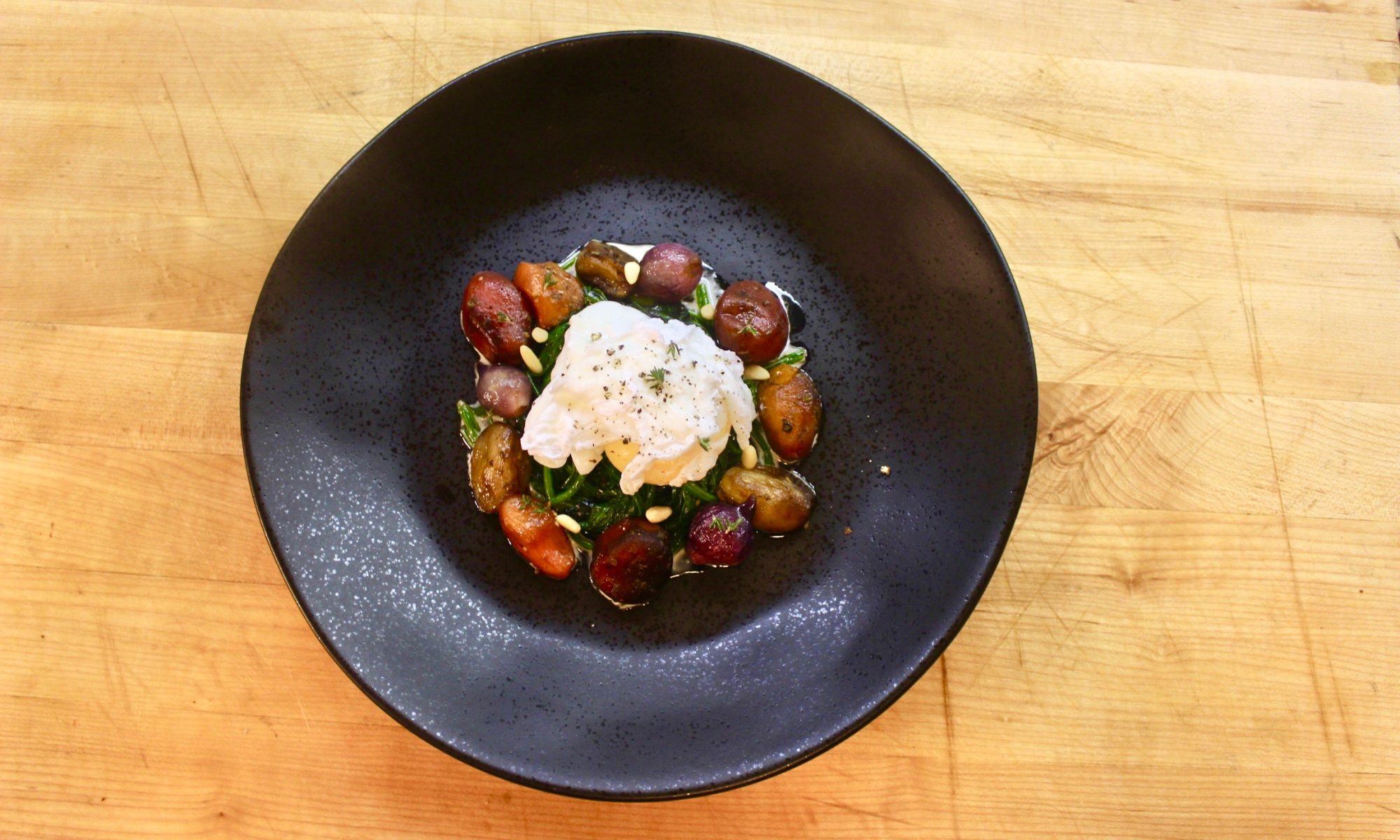 This is a stunning dish to serve as an appetizer. Not only does it look beautiful, it also tastes amazing. The tomatoes are served around a bed of spinach, with garlic aioli and balsamic reduction, topped with a perfectly poached egg in the center.

The first thing we need to do while the sous vide pre-heats is blanch the tomatoes and onions so we can easily peel them. Bring a pot of water to a boil. Since the tomatoes and onions are small you don’t need a lot of water; a medium size pot filled half way will be fine. While the water comes to a boil get a bowl of ice water ready – pour cold water into a medium size bowl and add ice along with some salt – about 2 tbsps.

When the water reaches a boil, carefully place the tomatoes and onions in and cook for no more than 30 seconds. Then transfer them from the boiling water to the bowl of ice water. This is called blanching.

Get your sous vide bag ready by adding the butter and balsamic glaze to the bottom of the bag. Then place the tomatoes and onions in followed by the thyme sprigs and vacuum seal.

Place the bag in the sous vide water and cook for 40 minutes.

When ready, use a strainer to separate the juices from the tomatoes and onions. Don’t throw any of it away.

Pre-heat a non-stick pan to medium-high heat. Once the pan is hot add a tbsp of olive oil or butter and spread. Add the spinach into the pan, season well with salt and pepper, and cook for about 1-2 minutes.

Bring water to a simmer (almost rolling boil) in a medium-large pan. Add a tbsp of white distilled vinegar and salt. Crack the egg into a small bowl – Make sure the egg is at room temperature before using it.

When the water reaches a rolling simmer, whisk the water in a circular motion then carefully place the egg in. Cook for about 90 seconds until the egg white has cooked but the yolk remains runny. Use a skimmer spoon to remove the egg from the water and place it on a plate/tray, on top of a paper towel sheet to drain.

I plated this dish with the spinach in the center of the plate surrounded by the heirloom tomatoes on a delicious homemade garlic aioli. Then I added the poached egg on top of the spinach and garnished it with some toasted pine nuts. You can optionally drizzle some of the balsamic glaze from the tomatoes right on top (see last picture).

Hi! My name is Mario Vallejo and these are my recipes. I hope you enjoy them!

I love food. I love cooking it and eating it. I love trying new restaurants, flavors and ingredients. But my favorite thing about food is sharing it with people. Food brings inspiration, art, science, and creativity all in one place. And our dinner tables are the stage among where most family and friendly debates happen. There is a connection that food creates among people. I love that the most.